After the Loreto Sisters arrived in Australia, from Ireland, in 1875, they established schools in Ballarat, Portland, Melbourne, Sydney and Perth before coming to Brisbane in 1927 at the invitation of Archbishop James Duhig. 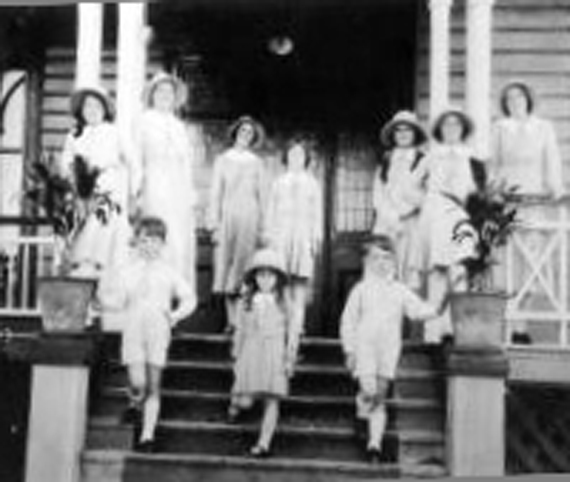 Six Loreto Sisters led by the Mother Provincial thus arrived to establish a convent at “Kemendine” in Cavendish Road, a significant two storey colonial home with wide verandahs, previously occupied by Colonel Edward Deshon, C.M.G., a British Officer of the 68th Light Infantry. Built in 1889, the impressive old house stood proudly on a commanding hillside site overlooking the lush green rolling hills of Coorparoo. The Deshon family lived here for almost 40 years before the property was sold. In February, 1928 the sisters opened their school in the old “Kemendine” home with eight pupils.

Loreto Brisbane has a unique and interesting fact as part of its capital development story– it once won the “Golden Casket” – a big prize in a State Lottery. This was in the early struggling days, which coincided with the world-wide depression of the late twenties. With the money from the windfall of the Casket ticket – given by a Past Pupil from South Australia –the first stage of a new two storey building began in 1930 to house a boarding kitchen, dining room and five classrooms. This building was completed in 1933 with the addition of a third floor. Today it is known as the Casket Building.

In 1942, with the threat of invasion by the Japanese from the north during World War II, nuns and boarders were evacuated to a disused grammar school at Glen Innes, N.S.W. where the school remained for two years.  During these years Loreto Convent was used as a convalescent home for Australian Servicemen.  The return of the school to Cavendish Road in 1944 meant much hardship and considerable readjustment after the wartime occupation by the troops.

During the 1970’s there were a number of significant changes that took place at Loreto: The phasing out of the Junior School, and thus the presence of Loreto boys, took place from 1972 to 1977 and the boarding school closed in 1979; The secondary school expanded to three streams and the original Deshon home was demolished due to rotting timber supports and floorboards. In 1974 the Loreto Sisters took over the Primary School of the Mount Carmel parish.  This school had formerly been conducted by the Franciscan Sisters. From 1974 to1987, the Loreto Sisters proudly led this school with whom we still have many strong connections.

In addition to the Casket Building, the major facilities developments at Loreto over the years have included:

Construction of the front red brick building, the well-known facade of Loreto Convent, which included parlours, classrooms and a Senior dormitory; it is now known as the Main Administration Building;

Construction of the first stage of the main classroom block, housing Science Labs, Library, Art Rooms and Staff rooms, followed by a second stage in 1969 and third stage in 1973;

Completion of the Mother Gonzaga Building and Chapel which feature heritage timbers and wrought iron from “Kemendine”;

Completion of the Pool;

Construction of the Mary Ward Centre, home to PE, Music and Drama;

Addition of the final stage of the main classroom block to provide improvements to the Tuckshop and Home Economics and to house Technology;

Completion of Mulwith, a new home to Art, Learning Enrichment and Year 11 students.

The original circular drive has undergone several changes over the years, eventually becoming the distinctive crescent path that sits atop the Deshon Oval as constructed in 1994. Where the original “Kemendine” once stood, a tropical courtyard and central Rotunda, erected in 2002, now stands. The Mary Ward Statue, installed in 2007, takes pride of place at its heart.

Completion of Cruci, a new home to the Year 11 cohort.

Remodelling of the Crescentia building including a fresh new facade, upgrading of classroom facilities and the addition of new learning spaces.